TO BE FAMOUS… I NEED TO CHANGE MY LOOK

To stay famous, celebrities need to change their look. The unknown celebrities rely on method acting, wardrobe and makeup. The famous ones have found that going under the knife will always keep them in the spotlight. Here is another installment and exclusive look at how celebrities stay awesome by changing their look.

LONI ANDERSON- Loni Anderson has made a career following the one true and time-tested formula for success: SEX SELLS. Who cares if she has the acting skills of Robert De Niro’s Hemorrhoid, her augmented breast still look 20 years young. After going under the knife more than Nicole Brown Simpson, Loni looks like she was manufactured in China. Mattel Toys offered her a contract to be their new “Mattel Smokey Barbie”. 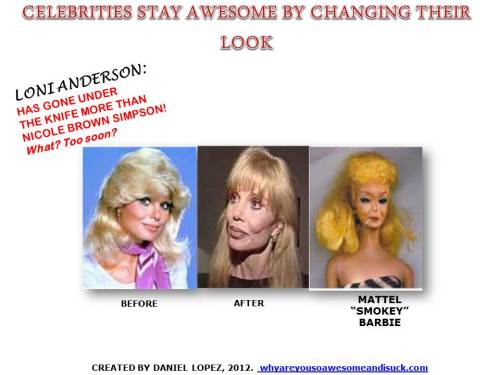 BURT REYNOLDS- Sadly, the once high-flying 76-year-old “Smokey and the Bandit” box-office champ is nearly broke and has undergone a quintuple heart bypass and back surgeries. Rather than throw in the towel, Burt has taken a page from the life of his famous ex, Loni Anderson. Burt has signed with Hasbro and is now “Hasbro Has-Been Spud”. Has-Been Spud is already getting work on the upcoming “Toy Story” sequel.

Stay tuned for more great transformations as we study celebrities and how….TO BE FAMOUS!